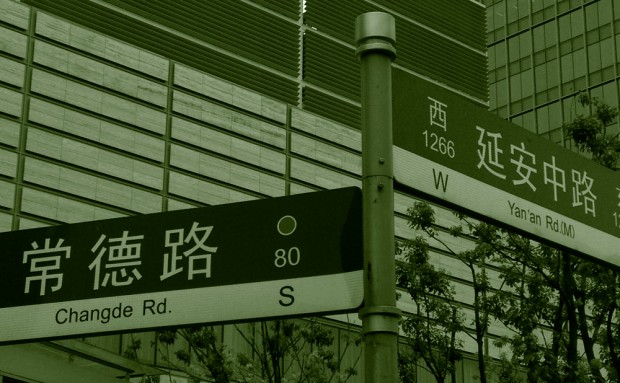 Polifactory China | This is our tenth “Urban Experience” in Shanghai, with which we intend to show the changes the city has undergone over time, and done understanding the urban morphology. We look at each street from an architectural, urban and historical viewpoint.

Introduction | The route is from the beginning of Changde road intersection with Yanan elevated,it ends where the road meets the Suzhou Creek. During the tour intersects only one of the streets that make up this whole entire Urban Experience, roughly halfway intersects Haifang Road (Urban Experience 09). Is a fairly uniform road except in the final third once crossing with Changshou Road, being the first two thirds the most attractive at urban level, since it is a street of great importance due to many large buildings on both sides, and crosses with important streets like Nanjing or Beijing. This section belongs to the district of Jingan initially but just the final part is in Putuo. From the starting point we take pictures every 200 meters, or whenever there is a significant change in the urban landscape. The scale of the street is fairly uniform. Length: 3,100 km.

History | Changde Road was formerly known as Hart Road, which was one of the last north-south streets west of the International Settlement, had no building apartments especially noticeable except Eddington House near the Bubbling Well Road junction, and fortunately today still preserved, and appear in the image 03 of this Experience. The other thing that was so was known stree is for hosting one of the Evangelical Churches in Shanghai at the time. It was mainly a residential street and was too close to the edge of the Settlement, and therefore had no great importance also for traffic.

Nowadays | It is one of the streets with more traffic flow in Jingan district with North-South direction, along with two other of his size and parallel such as Shaanxi & Wuning, the three organized traffic, but this is the only one where the importance of the car and the bike is similar, and circulate in similar rate. The street in the southern section, which is where we started, has a high traffic flow and many lanes, especially between Yanan and Beijing. Thereafter, traffic remains high speed but somewhat narrow lanes, and remains constant until the junction with Changshou. It is from that point where the street changes of scale to be much more local, and only a few meters ahead, and once past the area of the Muslim Xingjianese mosque, eventually losing his name just before crossing the bridge Suzhou Creek.

Urban Relevance | The importance of this route in this area of the city is high but not critical because this street organizes local traffic from medium to high speed (cars, motorcycles, bicycles few). Despite being flanked by two very important and parallel avenues as Wuning at west and Shaanxi at East, both with similar traffic, its relevance is not lost due to the number of residential towers in fairly large modern compounds. The other important point is that it houses the metro stations line 7 because just below it runs the subway tunnel. Its sidewalks are generally spacious but not nice for a pleasent walk, unlike many other nearby, hence the drivers also choose assiduously. It is in resume a major, busy street, with a high urban relevance and intensive local use.