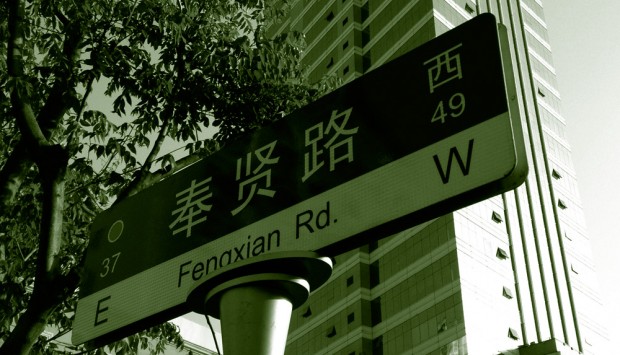 Polifactory China | This is our eighth “Urban Experience” in Shanghai, with which we intend to show the changes the city has undergone over time, and done understanding the urban morphology. We look at each street from an architectural, urban and historical viewpoint.

Introduction | The experience is from the Fengxian street´s beginning at the junction with Fengyan very near Nanjing and ends where its name changes to Nanyang. During the tour intersects only one of the streets that make all this complete Urban Experience, such as Shaanxi (Experience 12). It is very uniform in its street sections, since it runs through peaceful areas of the city as it is the street of secondary use in the area. From the starting point we take pictures every 200 meters, or whenever there is a significant change in the urban landscape. Length: 1,400 km.

History | The street Fengxian was formerly known as McBain Road . This street was well known in his time for being the one who came into the land of the McBain family, which was very important for the development of the city and its economy. Later, thanks to the sale of one of the largest property of the family, the street was known as the Hotel Majestic access. It was not an overly important street because it was very close to Peking Road at north and Bubbling Well Road at south.

Nowadays | It is a very uniform street in all sections. It is constantly flanked by trees and buildings of no more than three floors. It’s another street practically used locally and for the slow bicycle or motorcycle traffic. It has a lot of life in the neighborhood, and no public transportation. Being considered the back street of the city´s relevant ones as Nanjing and Beijing, has become local traffic artery with lot of pedestrian traffic too, and with very small businesses on both sides, only in its final stretch when it arrives to the street “Shaanxi Road” begins having large office buildings which have begun to colonize the large yards of the villas that were in this area.

Urban Relevance | The importance of this road in this area of the city is not crucial as this east-west axis despite being used by the majority of citizens, a street that does not bind crucial points of the city but instead is used by many people to move parallel to the main avenues, where the use of the motorcycle or bicycle is prohibited. Due to its small amplitude has no public transportation of any kind, and is instead an artery for transportation by bicycle or electric bike. For the life of the city is a major street, but the traffic is almost nonexistent.