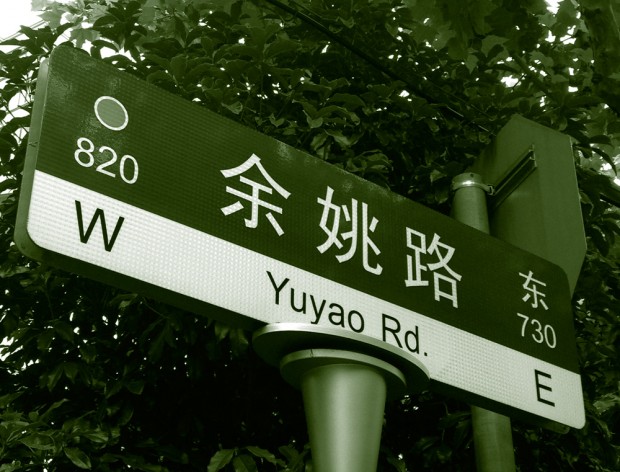 Polifactory China | This is our ninth “Urban Experience” in Shanghai, with which we intend to show the changes the city has undergone over time, and done understanding the urban morphology. We look at each street from an architectural, urban and historical viewpoint.

YUYAO-HAIFANG ROAD
Introduction | The route is from the beginning of the Yuyao street at the junction with Wanhandu and continues where its name changes to Haifang, the end of this experience is where the street crosses Suzhou Creek (the street Nansuzhou (Experience 01)). During the route crosses two streets that make all this complete Urban Experience, such as Shaanxi (Experience 12) and Changde Road (Experience 10). This is a fairly uniform street in all sections, even though initiated something calmer way almost all the way is in a very dynamic part of the city with heavy traffic and medium to high speed. From the starting point take pictures every 200 meters, or whenever there is a significant change in the urban landscape. Length: 2,600 km.

History | The Yuyao-Haifang streets were formerly known as Singapore Road & Haibo Road . This street was one that ran both outside and within the concession and therefore changed its name because of it, when It was in the Concession was Haibo, and when left in the outer streets of the West was called Singapore, which name was given after the establishment of the English colony in South Asia. It wasn´t a street especially known for anything, except to be a meeting place for outdoor activities and associations of all kinds related to external concession activities.

Nowadays | It is a very uniform street at all sections. We are facing a major transverse arteries of Jingan district, despite not being the best known, is one of the most used by both public transport and by car but also neighbors in cycling. Is almost continually flanked by trees and buildings of different heights, but in almost all corners many high rise. It houses at some point of this experience a building closed completely in disuse, and was the result of a total fire in 2010 (image 08). In general it is a street with a lot of movement of all kinds, although its initial and final sections street becomes much slower.

Urban Relevance | The importance of this road in this area of ​​the city is relevant because this east-west axis, is used to communicate some of the most important streets in the neighborhood. It has the necessary width to accommodate all types of transportation from buses to cars, motorbikes and bicycles. It does not become an avenue crossing the neighborhood, that´s wny it makes it a very neighborhood street in a very balanced way, as there are similar in Jingan, as for example Wuding Road.